Well, since the world is still here, you can have one more chance to get Part 3 of "The Peaks Trilogy" for free, for Kindle.

Join Martina and Jon, along with their families as they struggle through a spiritual odyssey set in the distant future.

Look at religion from a completely different point of view.

Don't have a Kindle?  You can get the complete trilogy in one paperback on Amazon.com! 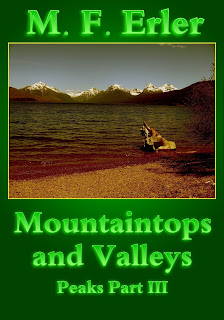 Posted by mferler.blogspot.com at 5:27 PM No comments:

Well, here it is 2013--sometimes I wondered if we would make it this far.  Between all the talk about the Mayan calendar and the Fiscal Cliff, it makes one wonder.

Still, as I look out at the mountains around me here in northwest Montana's Flathead Valley, they seem to just stand there with some secret knowledge of their own.

I wrote most of my first two books in their shadows--way back in the early 80's.  Then I didn't touch them for 19 years, while we lived on the shores of Lake Huron in Michigan.

Michigan had its own special qualities--and now memories--but no call of the mountains.

It took coming back here to resume working on "The Peaks at the Edge of the World."

I felt a sense of urgency to get it out before the end of 2012--and it is--on Kindle--and as a paperback on Create Space.  Both are currently only available from Amazon.com--or thru me.

Now that 2013 is here, I wonder, what next?  I have drafts of a sequel, and for some reason (probably having to do with the long winters here), it is called "When the World Grows Cold."

But there is more to it than that.  I sense the world growing cold toward the Lord--and his people.  Where is this world headed?

Well, only time will tell.!  So here's to the New Year...
Posted by mferler.blogspot.com at 6:01 PM No comments: