May has finally arrived, amid freezing nights, wind, and record cool temperatures in many parts of the northern tier.  But at least it's here!  Happy May Day to everyone. 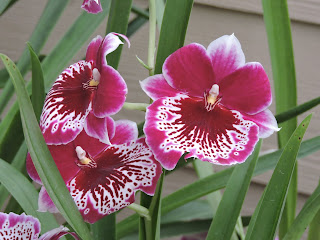 May Day is a carry over of an old festival called Beltaine,which I've found is a celebration of the coming of spring and the fertility of the earth.  It must have arisen in northern climes, because I can really relate to waiting until May for spring to arrive.  It never shows up in March when the Spring Equinox takes place.  At least not in Montana.  In fact, May 1 is the midpoint between the Spring Equinox and the Summer Solstice.

Some of you may remember May Baskets we made for family and friends on May Day.  Or perhaps even dancing around the May Pole.  These are probably pagan in origin, but who can argue with bright colors and spring flowers after a long, bleak winter?  I sure can't.

When I worked at Holy Family Catholic School, I encountered a festival I'd never heard of called "May Crowning".  It involves a procession with brightly colored spring clothing and flowers, and it's when the Virgin Mary is crowned with a wreath of flowers as Queen of the May.  If any of you saw the 1990s movie "Sister Act" perhaps you remember the song the nuns were singing which said "Salve' Regina".  That's one of the songs of May Crowning, and it means "Save us, O Queen."  The takeover of a pagan festival by the Church is nothing new, as many of you know.  But it doesn't bother me.  I like the idea that things from our early heritage have been put into new molds and carried on into the present day.  To me it shows that God is over all.  And after all, who made all those lovely flowers?  According to Jesus, he clothed the flowers better than "King Solomon in all his glory."

One spring, my best girlfriend and I found a whole field of daisies near her house.  We picked a huge bunch and handed them out all over our high school (of almost 2000 students!).   By the end of the day, there were daisies to be seen everywhere.  We had such fun that day.  Maybe a few of our classmates even remember it.  Such a contrast to what is happening in school now.  I hope it's not too late to try to spread some joy instead of pain.

So, if you can find some, grab a few of those colorful flowers and crown someone with them.  Happy Beltaine!
Posted by mferler.blogspot.com at 12:51 PM 1 comment: