How Did a Turnip and a Beanstalk Lead to Jack-o-lanterns? 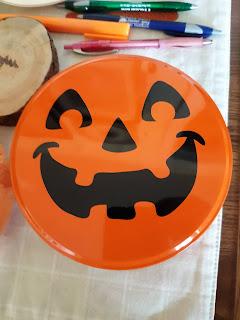 One Celtic tradition that crossed the Atlantic with many Irish and Scottish immigrants was the “Jack Tales.”  The one familiar to most of us is the story of “Jack and the Beanstalk.”  Recently, I’ve learned that there are many more of these tales of a sharp-witted trickster named Jack.  Here’s one for Halloween:

The Celts have long observed Samhain (pronounced sah-wheen) on October 31, marking the midpoint between the Autumn Equinox and the Winter Solstice.  As the northern nights grew longer, the Celts believed Samhain was the night when the world of the dead and the spirits was closest to the world of the living.

From this has grown our tradition of ghosts and goblins abroad in the night.  In ancient times, people dressed in costumes to scare the real ghouls away.  Offerings of special foods were set out to appease the ghosts so they would leave without committing mischief.  Hence our tradition of “Trick or Treat.”

The popular Jack-o-Lantern was also part of this tradition.  The tale goes that Jack’s spirit roamed the earth on Samhain, but decided he needed a light to better find his way.  In a farmer’s field he found a very large turnip, hollowed it out, cut eye-holes, and put a candle inside.  Thus was born the JACK-o-Lantern.

Perhaps others in the world of the living took Jack’s idea and turned it into a light to keep the ghosts and ghouls away, placing the lights on their porches or in a window.  In America, pumpkins were more common than turnips and easier to carve.  And so our tradition was born.

Wishing all of you a Happy Halloween!

Posted by mferler.blogspot.com at 9:13 AM No comments:

Just a teaser: excerpt from a new book I'm working on.  (MFE)

Lauren woke with a start, wondering where she was.  Then she heard the deep breathing beside her and glanced over at the lanky form sleeping there.  His arm was lying underneath her.  White sheets were wadded all around them, and she suddenly saw she was naked.

Then a rippling shock flowed through her,  What have I done?  Now there’s no turning back.

Here she was in the silence of a hotel room, feeling a parade of emotions.  First there was fear and regret.  Have I compromised all I thought I believed?  But Dave seems to really care for me--I hope.

As she rolled and turned her face toward his, a slight smile played at the corners of his mouth, sending a throbbing thrill through her, echoing the[Ma1] warmth and pleasure of his intimate embrace.  For the first time in a long time she felt loved and safe.

Now his eyelids fluttered open, and his smile grew larger and warmer.  “Awake now?” he murmured.  “Are you alright?”

She nodded and drew closer to him.  “I’m fine, for the first time in years.”

“I’m glad,” he smiled, and then kissed her lips gently.

She flowed into him, their bodies no longer two separate entities.  There was nothing left to do but let the heat burn on between them.

They couldn’t be together every night, even though she ached for it.  He needed to find ways to keep his wife from getting suspicious, so she had to be ready to change plans at a moment’s notice.  At first, this didn’t bother her.  After all, it wasn’t as though she had much of a social life.  Just transporting her kids to and from their activities.  Ginna had her driver’s license now, but they couldn’t afford a second car.  This wasn’t a huge problem, since Lauren had few other obligations outside of her job.

Soon, she was willing to drop anything to be with Dave, at whatever secret rendezvous he found.  Her needs began to outweigh her thoughts of her children, dear as they were to her.  Hunger for Dave kept growing within her.  Sometimes it caught her in an unexpected rush. Her lower abdomen would get an urgent contraction, then warmth, followed by quickened breathing, and often tears in her eyes.  She’d never realized hormones could do such powerful things to her body.

Some days she’d get angry for reacting this way, telling herself she shouldn’t feel this intense attraction to someone else’s husband.  But her body was unable to listen.

As the weeks went by, she stopped counting their encounters.  Whether this grew out of guilty feelings or not, she told herself not to care.  Things began to blur.  All she could focus on was when they could be together again.

One Friday after work, he drove much farther than usual, west toward Denver.

“Where are we going?”

It was late fall and the days were growing shorter, so everything was dark, and stars were appearing by the time he pulled into a lane with a sign reading Palisade Estates.  The road was unpaved and rough, so he took it slowly.  Evergreen trees loomed high overhead, blocking the stars.  Then just as he rounded a corner, a mountain vista opened with a small log cabin in the foreground.

“Oh, Dave, it’s really romantic out here in the wilderness with only the stars to see[Ma2]  by.”

“I’m glad you like it,” he smiled.  “It’s been one of my favorite places for a long time.”  He gathered her into his long arms.

For an instant, she wondered if he and his wife had come here often but dared[Ma3]  not ask.  Instead, she took a deep breath to clear her mind as they got out of his car.

“Why didn’t you tell me we were coming so far?”  she asked, an edge in her voice.

“Well--I guess not.  My kids are both sleeping over at friends’ places since it’s Friday.  But I need to know if I’m going to be gone more than one night.”

He covered her hand with his large warm one.  “Your hands are cold,” he whispered.  “I’m sorry I couldn’t forewarn you.  I guess I’m only thinking of my needs.”

My kids are old enough to manage.  She wanted to believe this—to stop the feeling of guilt growing in her chest.  Then her physical need for him began to override these thoughts.

By this time, he’d pulled her closer and was gently moving his thumb across her cheek.  “You are so wonderful for me,” he murmured.

Even though she wanted to reply, her voice caught somewhere in her throat.  Gazing over his shoulder, she could see the full moon rising behind him.  Soon his hair was outlined in a halo of moonlight.

As they stood on the small cabin’s porch, his hands moved to her shoulders before she realized he’d even lifted them.  In the next instant, her sweater was being pulled over her head and his hands were working their way into her blouse.   One of his arms was behind her shoulders, pulling her toward him in a fierce embrace.  She’d never felt such urgency and power in him.  His lips pressed hard and hot against hers.  Gradually he moved his lips down her neck, and she moaned in pleasure.

Then he carried her in his arms through the cabin’s door, both of them pulling off clothing and tossing it aside as they made their way to the tiny room’s bed.

[Ma2]maybe wilderness instead of wilds

Posted by mferler.blogspot.com at 1:15 PM No comments: