The Long Road to the Sequel

When I started "The Peaks at the Edge of the World" my goal was to write a Trilogy, and I did.  But then some more really unusual ideas occurred to me, and I just had to press on.  I'd barely published the Trilogy when I started on Book Four, which I called "When the World Grows Cold"

As it turned out I put a lot more labor and time into this book than I expected.  Now it's almost two years later, and finally, I have it where I want it.

It is set about 25 years farther along in time than the Trilogy, so it's about the next generation, Jon and Martina's descendants.  Thought some of the main character from the original Trilogy are still around.  There is a really strange time-travel twist that I think readers will find intriguing.

And just in case anyone is wondering, I have started Book Five, too! 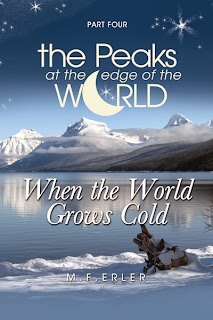 Posted by mferler.blogspot.com at 4:34 PM No comments: